Join us on Facebook live for a virtual full moon climb – The October full moon is often referred to as the Full Hunter’s Moon, Blood Moon, or Sanguine Moon. Many moons ago, Native Americans named this bright moon for obvious reasons. The leaves are falling from trees, the deer are fattened, and it’s time to begin storing up meat for the long winter ahead. Because the fields were traditionally reaped in late September or early October, hunters could easily see fox and other animals that come out to glean from the fallen grains. Probably because of the threat of winter looming close, the Hunter’s Moon is generally accorded with special honor, historically serving as an important feast day in both Western Europe and among many Native American tribes.The Cape 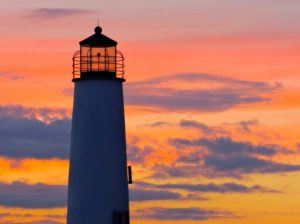