Anniversary of Pearl Harbor and Christmas During the War

Camp Gordon Johnston WWII Museum in Carrabelle is presenting two special exhibits in the month of December. The focus of one exhibit will be on commemorating the Anniversary of Pearl Harbor and the focus of the other exhibit will be on exploring Christmas During the War. These two exhibits will open Tuesday, November 29 and be on display until Saturday, December 31. The museum is open every Tuesday through Saturday from 11 am to 5 pm and there is no charge for admission. (The museum will be closed Christmas Day and New Year’s Day.)

In honor of the Anniversary of Pearl Harbor, Camp Gordon Johnston WWII Museum is presenting an exhibit commemorating this dark day in America’s history. World War II came home for the United States on December 7, 1941, when the naval and air forces of the Empire of Japan attacked the US Western Fleet at the American base Pearl Harbor, Hawaii. President Franklin D. Roosevelt called it “a date which will live in infamy”. Learn about those that planned the attack, the sole Japanese POW taken, and the heroic efforts by Doris Miller of the USS West Virginia to shoot down attacking Japanese planes. This attack resulted in the declaration of war with Japan and the US entering World War II. Luckily, the Pacific Fleet’s aircraft carriers were at sea on that day, and escaped damage to fight later. “Remember Pearl Harbor” became the rallying cry of Americans as they enlisted by the thousands and built up the immense industrial effort needed to achieve victory in 1945.

The second special exhibit for this month will reflect on what Christmas was like during the war. Americans had to learn to do with less during the years they were fully engaged in fighting World War II. That had a significant impact on every aspect of American life including how Christmas was celebrated. Americans were encouraged to make their own toys and decorations, and commercially-made gifts emphasized materials that were not needed for war, including cloth, paper and wood. For example the popular Lionel Train toys were converted to cardboard and people learned how to cook and bake with corn syrup once sugar became scarce. Learn more about how rationing changed toys, food and even decorations during the war. 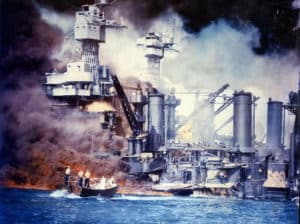