Rae Ruff has worn many hats, including Emmy award-winning CNN producer, ad-agency executive, White House assistant pastry chef, author, and artist. Though she feels most at home when she’s in her favorite element: painting.

She wrote and self-published “Defriending Facebook,” a memoir on the intense pressures and addictions she fell into with social media. Her narrative details how she came dangerously close to taking her own life and how she healed herself by going offline. Ruff says, “My book was written to share my experiences to help others silently suffering online.”

She holds a communications degree with a pre-medical concentration from the University of Florida. She also has a Pastry Arts degree with Honors from L’ Academie De Cuisine. After graduating, she worked for White House chefs Anne Amernick and Frank Ruta.

When Ruff was eight years old, she began studying and practicing oil painting in the traditional Renaissance style. In her forties, Ruff’s work was rebirthed into acrylic painting in the form of vivid abstracts via synesthesia, using her pastry palette knives, her “dancing” fingers, and drip painting onto an array of canvas mediums including linens, plywood, and masonite. 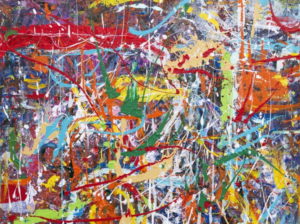