Camp Gordon Johnston WWII Museum presents a special exhibit on the most violent and costliest campaign of WWII, the battle to take Okinawa. The exhibit will include historical photos and Marine Corps artifacts, some of which were recently acquired. The battle started with the Kerama Islands’ capture by the 77th infantry Division on March 26, 1945, and ended 98 days later, on July 2. This effort involved three marine divisions and four infantry divisions making up the Tenth Army, which had its tactical air force, and was supported by naval and amphibious commands. The battle cost more lives on both sides than any other campaign in the Pacific. The taking of Okinawa provided a base from which Operation Downfall, the Japanese mainland invasion, was to be launched. Operation Downfall, of course, was made unnecessary by the surrender of Japan in September of 1945.

There is no charge for admission, but donations are gladly accepted. 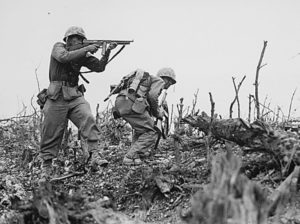