Camp Gordon Johnston WWII Museum in Carrabelle is presenting a special exhibit about the surrenders and war’s end in the Asia-Pacific and Europe-Mediterranean Theaters of Operations.  This exhibit will open Tuesday, September 28 at 11 am and will be on display at the museum until Saturday, October 30, 2021, at 5 pm.  There is no charge for admission but donations are gladly accepted. The museum and exhibit are open every Tuesday through Saturday from 11 am – 5 pm.

On May 7, 1945, Karl Donitz, Hitler’s successor, signed the unconditional surrender of Nazi Germany’s armed forces to take effect the next day. On May 8, people filled the streets in celebration, and this day is known as Victory in Europe Day (VE Day).

On August 14, 1945, the Japanese surrendered without qualifications to the United States and thus, preparations began for an official surrender and the end of World War II. On September 2, 1945, the formal surrender documents were signed on the decks of the U.S.S. Missouri in Tokyo Bay. This day is celebrated as Victory over Japan Day (V-J Day) in the United States. Come to this special exhibit to learn more about these two surrenders and how World War II ended. 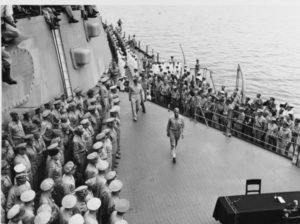